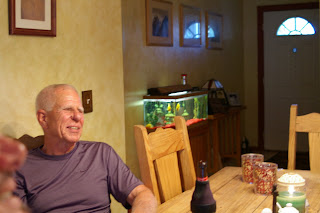 I usually don’t post pictures of too many people on my site.. mainly because I would rather write about things that interest a vast majority. But, in this case… I had to publish this. The man in the photo is my brother in law, George. I love this pic of him because I felt as if you can almost tell from the photo what kind of person he is, and isn’t that what we want to capture in pictures? The essence of the being. He is a warm, kind, honest hardworking man. He is jovial and a pleasure to have the company of. In the photo he’s looking at my sister, who was holding my daughter at the time. He loves my sister so much….you can tell by how he speaks to her and brags about her with out even trying. He can’t talk about her without saying something complimentary, and my sister is the same way about him. They have found their match in each other and are each other’s rock. They have been married almost 20 years now… and every time I see them together it makes me so happy that they are together.