If you follow my instagram and page feeds; you’ll know that two new baby birds made their way into our home over the week. One is an Indian Ringneck and the other is a little baby Budgie. Now, I have to say; I was never a “fan” of the bin of birds that you see at pet shops, (they are Budgies- although sometimes they are refereed to as parakeets). I wasn’t a big fan until I learned how intelligent and remarkable these little birds they are. Apparently, they can speak just as well, if not better than most large parrots. Crazy, huh? I have a feeling one day I’m going to be an activist to bring awareness to the intellect of cheap pets like hamsters and parakeets. 😉

24 hours after I showed my hubby the video, he surprised me and my daughter  by  asking how much they were, (which is usually a good sign) then he asked where we could buy one.  Of course, they have them everywhere …. but, I’m a little “high maintenance” when it comes to pet birds. I’m not a fan flighty nervous birds in cages. I like the hand fed babies that want to be a part of the family.

But, Miami has everything. 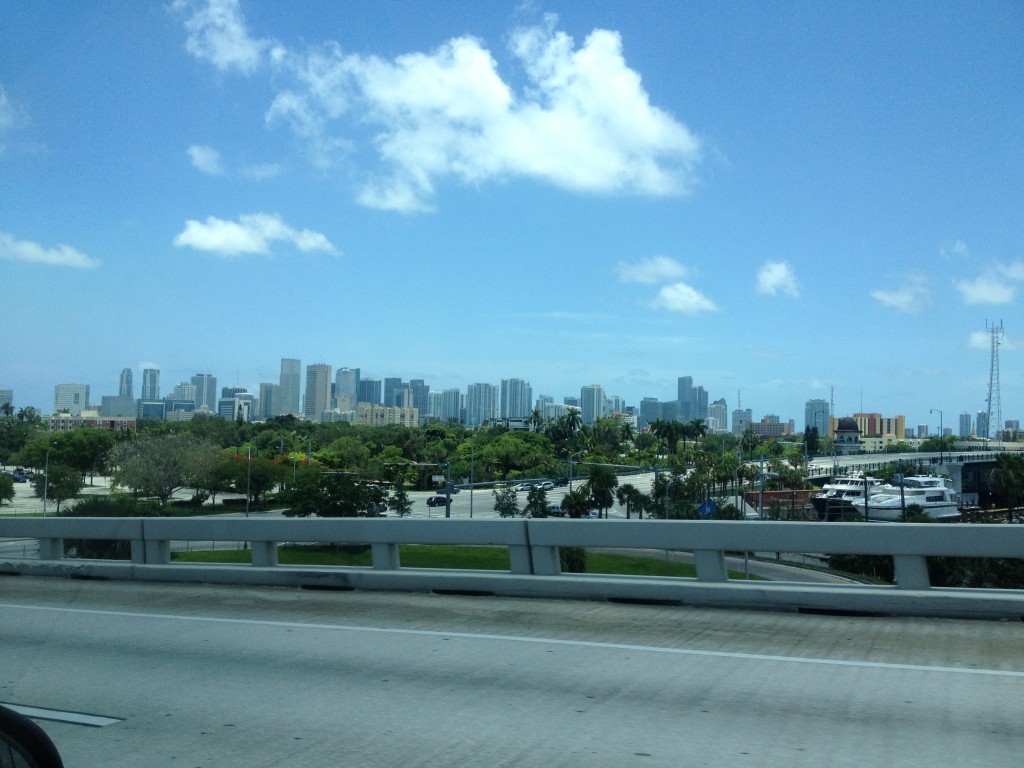 Well, sort of an hour drive. My iPhone’s directions were very inaccurate and they led us to a less than savory part of Miami.

When we finally found our “bird dealer” he was in a parking lot of a CVS. (The whole time, we are thinking we’re going to some guys house) but, there he was in the parking lot,  his car’s  hatch opened to plastic and cardboard containers of assorted baby birds. (I guess he thought I may be a baby bird addict and want more than one?) The first thing I looked at was their crops, which is a sac on their chest, to see if they had been eating. Fortunately, every bird he had was in excellent health. Full crops, alert and lively. My husband was asking me why I was looking at the birds we weren’t there to get, but I was making sure they were all being cared for, not just the species we were there to buy. Apparently, the “bird dealer” was a good bird daddy, and everyone seemed in excellent health. So, our journey was worth the destination. 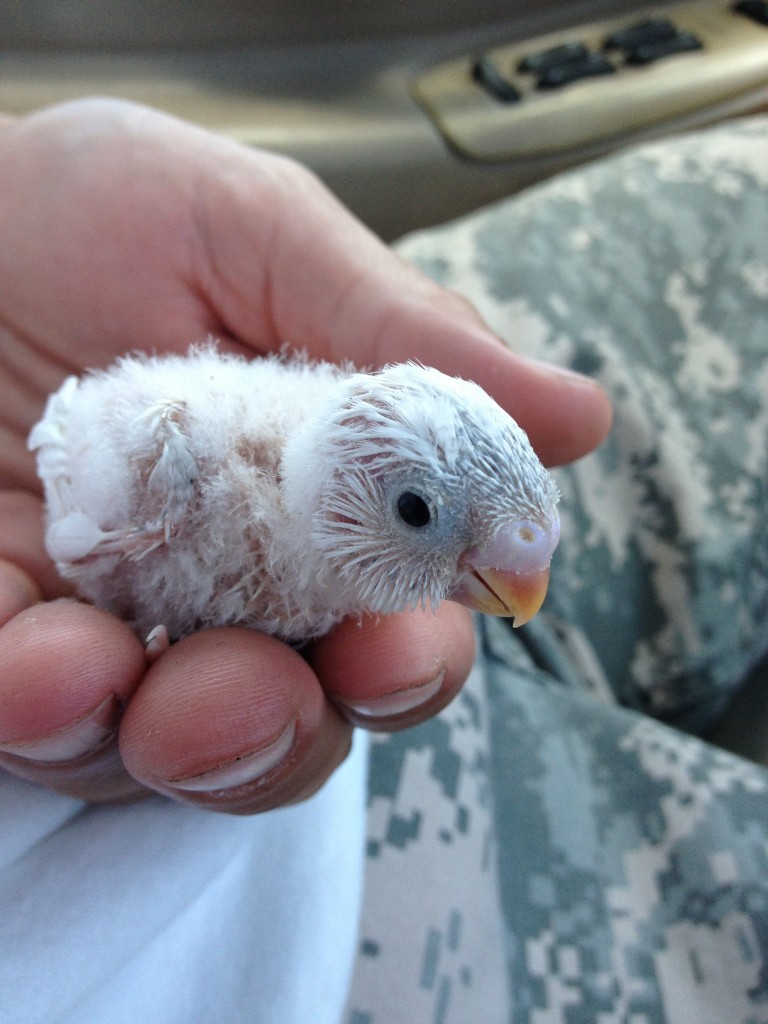 And, we found “Paulie”, our newest baby. I’m hand-feeding him (along with Brobee) for the next few weeks… which is basically mixing up a sweet smelling formula and feeding the birds by using a hollow plastic syringe. 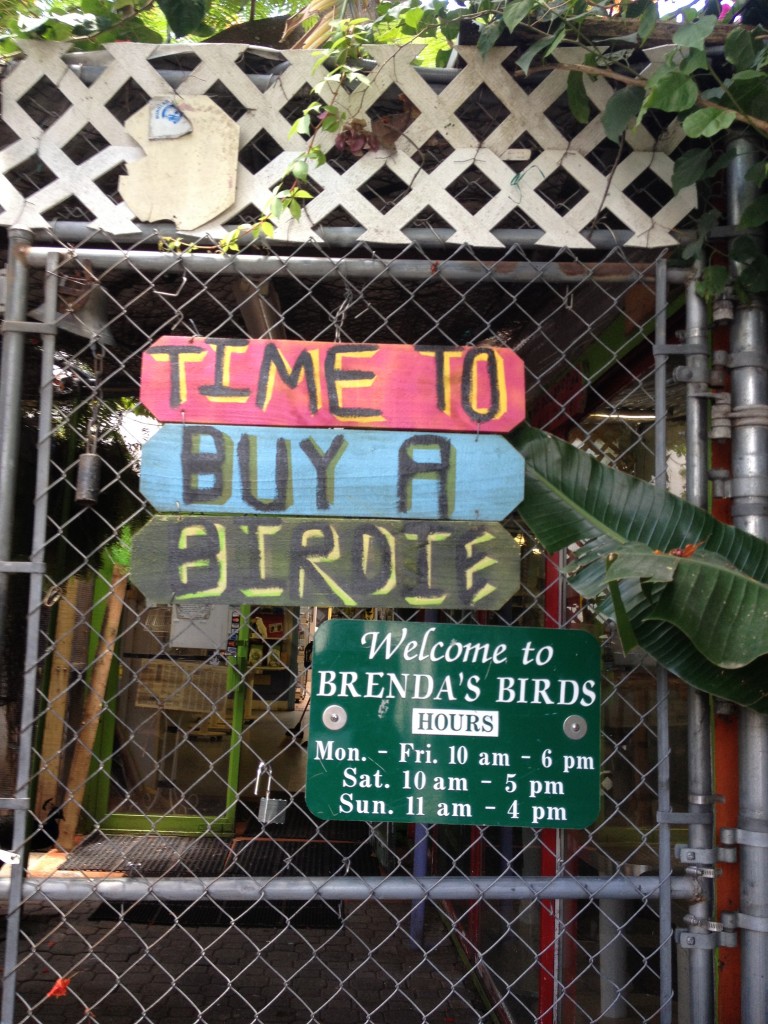 One Thursday morning, my daughter and I decided to take an adventure to Brenda’s Birds, a large bird aviary that’s located in the middle of a quaint historic neighborhood. With it’s white painted fences and whimsical signs, it felt a little bit like I entered Key West. 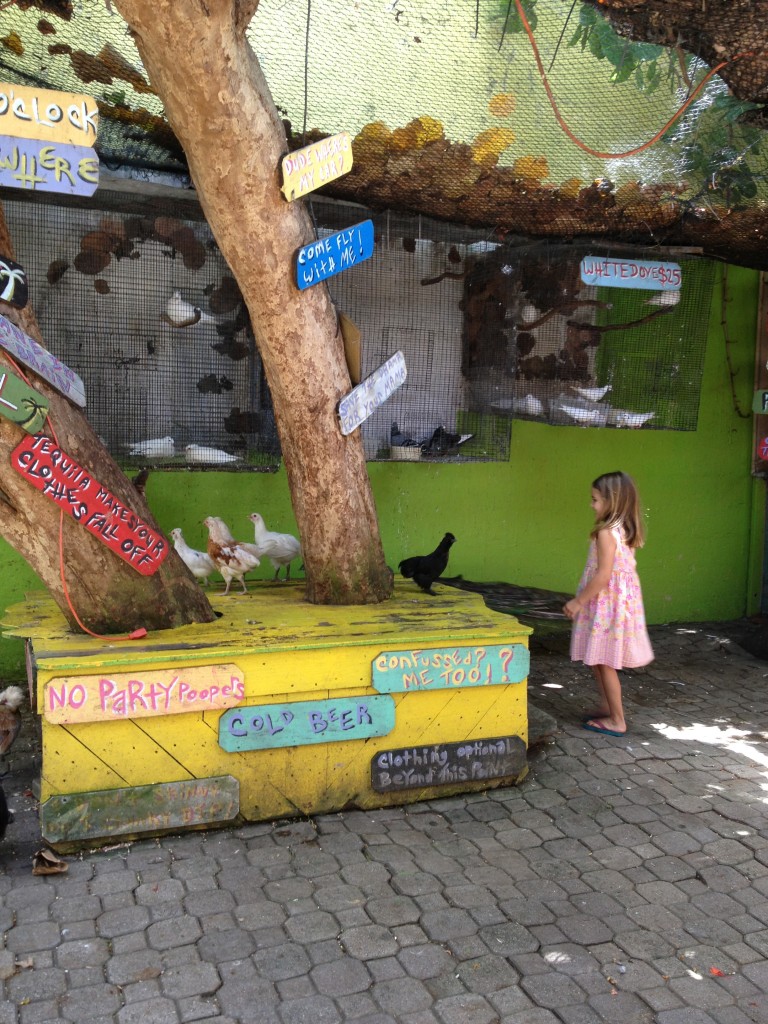 There are birds everywhere, most of them were rescued or surrendered. It’s kind of like a “bird pound”, but without any euthanasia. 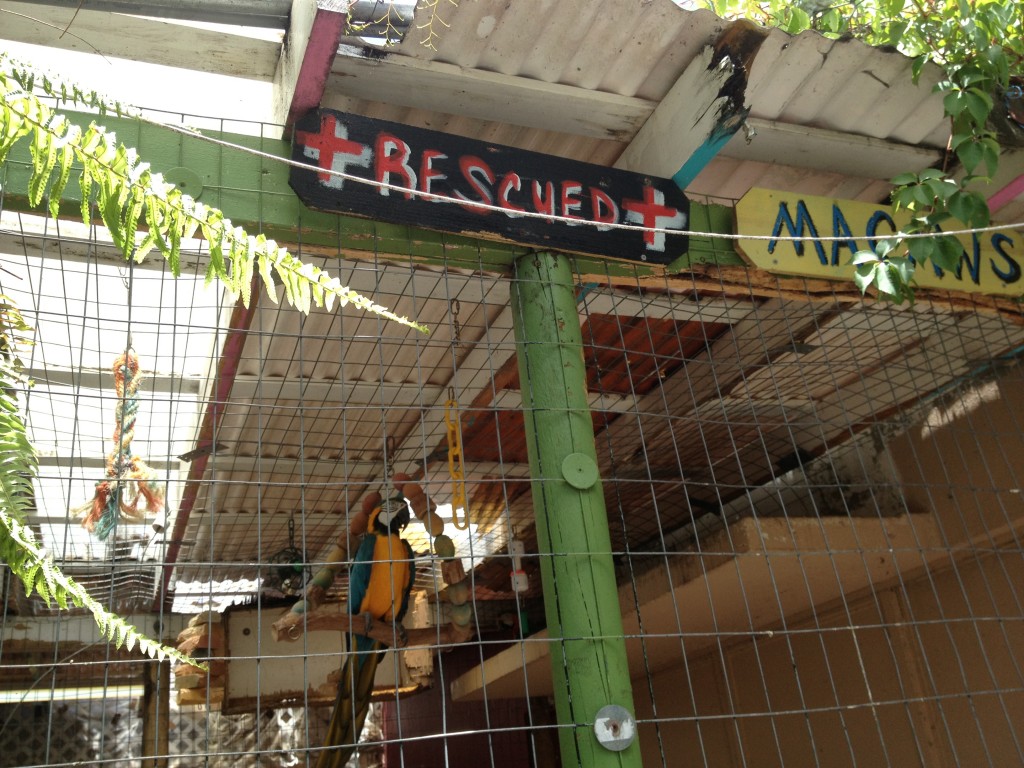 They had a massive cage with rescued Macaws, and this guy here was just happy as could be on his swing.

So, I had been researching my bird species, I have always wanted a cockatoo, or an African but, my husband gets a little intimidated by beaks. (We’re working on that 😉 ) So we had it narrowed down to an Eclectus or an Indian Ringneck.  The one with the smallest beak won. (The ringneck)

Meet Brobee:( Named after the green Yo Gabba Gabba character) 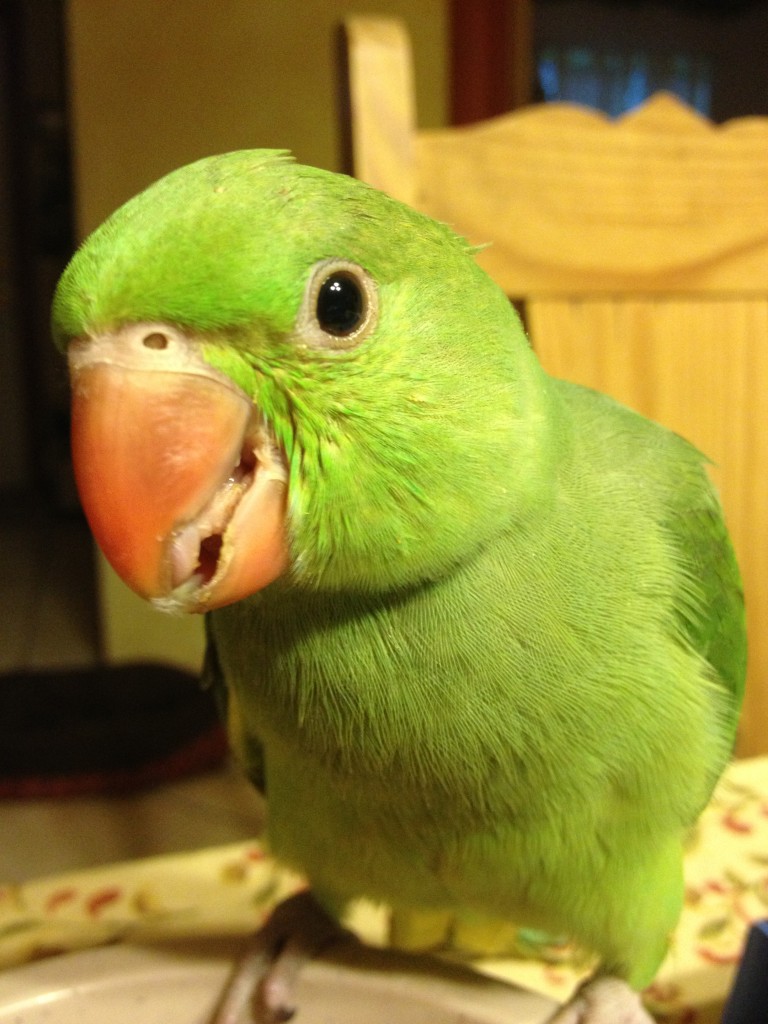 Brobee is a baby Indian Ringneck parrot and when he grows up he’ll look like this: 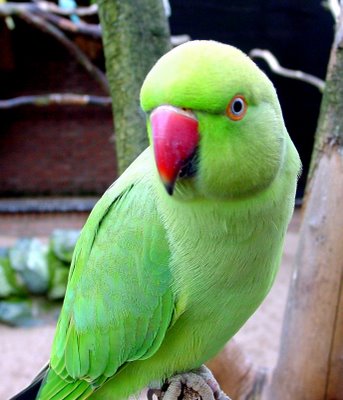 For now, though he’s just a baby and needs his “bottle” 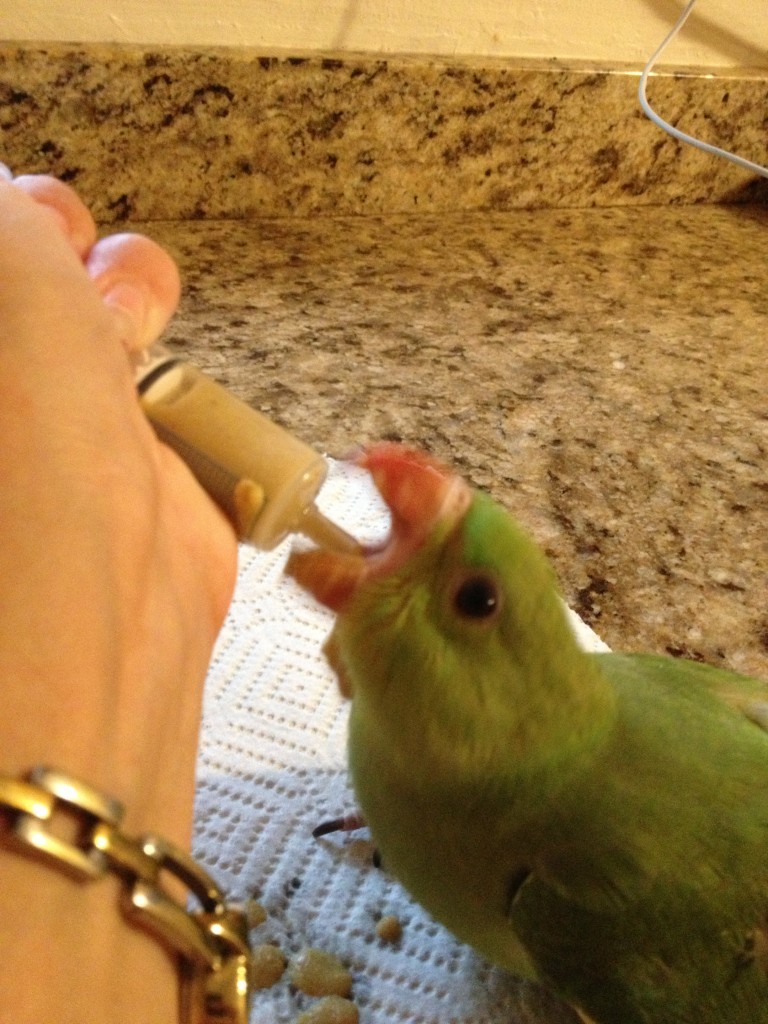 Aside from our new parrot nursery, we haven’t done too much. But that’s okay, because we’ve done plenty.  I think I’m a little crazy. Here I was thrilled that there was all this “free time” in the summer, so I go and find new things to consume it… but, it’s totally worth it.

I  also see how God turned something that was sad into something so wonderful. You see, the day I got Brobee was the same day that my husband’s ex wife delivered her second child. I knew that the situation of her having a second child was going to ignite my depression in me; perhaps some jealousy, maybe resentment. You see, she wasn’t there in the beginning  for the first child, and I stepped up to fill in the gap.(She’s a wonderful mother now, by the way) I would simply love to have another child, but it’s just not in the cards. Although I am thrilled at her new baby and resurrected life she has made for herself, I knew the fact of her having another child would illuminate the emptiness I sometimes feel over the situation. If I can’t have another baby to love and care for, a parrot is the next best thing in my book. (Especially with their life span) God knew that, and led me to our new babies.

I still would like another baby, but I also am quite content with the life and animals we have. My husband and I both have a deep compassion for our ever growing menagire and couldn’t imagine life with out animals in it.

Sometimes, situations make you aware of who you are, where you’ve been and where you want to be. My bird dying, and being blessed with new life to nurture has given me a greater understanding of the uncomfortable changes that happen in life, and it’s strengthened my faith in knowing that He never forsakes us.

There is always a rainbow after the rain. You just have to step out and look for it.