For the past four years, I had a weekly breakfast with my dad. This may not seem like a big thing to most people. I’m sure lots of people share meals with a parent or two, but… for me it was different.

You see, my dad moved out when I was 8, and although he still took me to school daily for several years after that, I had built a wall around my heart I never recognized until later in life.  I seldom spoke to him on those car rides, and I would duck down so my peers would not see me in the 1965 Volkswagen Bug he would escort me in.  My dad was 43 when I was born, and the cruelty of kids in elementary school only added to the youthful angst of my less than perfect family. “Is that your grandpa? His car is run by a lawnmower!”, they would taunt me daily. He was 63, about to retire and driving my ungrateful shell of a human every day to school. He was living in a small one bedroom apartment, and working to provide for not only himself, but both my mother, my sister and myself. He never divorced my mom, and eventually accepted the fact that they would eternally “go steady”.

I grew up, and he grew old.

As I matured, I realized that more often than not, it was my dad that always saved the day.

He taught me to drive stick shift.

He jumped my car on more than one occasion.

He came to rescue me after my first car accident.

He took me to the mall when I got a 3 hour  pass from “the center”. ( I was placed in a rehabilitation home for kids when I was 13. I was a chronic runaway and the authorities said it was that or Juvenile detention)

He helped me get my first car loan.

He and I built a turtle cage together.

He would take me thrift shopping when I wanted furniture to paint for my room.

He watched my dogs when I went on vacation.

After my mom was diagnosed with cancer, she began a less than active lifestyle, and their days of going to lunch and the  movies ceased. He would golf in the morning and wait. Wait for her to awaken, wait to see what the afternoon would bring.

So, one day, I asked if he’d like to do breakfast after I dropped my daughter off at school. I assumed he’d say no, he would golf every morning and he was 80, after all and he was pretty much set in his ways. But, he said yes.

After a few months, I began to badger him to let me tidy up his apartment. It had not been cleaned in years… he said no, then, finally he said yes.

So, our breakfasts became that. A hearty meal and a way for me to thank him for all those years I was so ungrateful. He would call me every evening, and tell me how nice things looked, and how good it smelled. One Christmas, my daughter and I “broke in” and laid new door mats and bath towels out. I set up his Christmas trees, and changed batteries in smoke alarms, and set clocks after time changes….

Six months ago, he said to me; “You know, Michelle, the apartment was only supposed to be for 6 months. I would have never gotten it if I knew it was going to be longer.”

One week we had a breakfast planned, but I had to change it to a few days later. He called me for help walking his dog  the next  morning. He said he took and Advil and felt like it was stuck in his throat. I came over and walked his dog, warmed his coffee, and noticed his feet looked swollen. He said they were fine. I asked if he wanted me to call the medics, he said “No. Absolutely not.”

Later that afternoon, I told my mom I was worried about him. she said she spoke with him and he was fine.

The next day, she called me. She hadn’t heard form him in 24 hours, and wanted me to go check on him. I have to admit. I was scared. I had my daughter with me, what if… something happened? But, after a persuasion from my husband, we left. My heart boomed in my chest, making my coffee and cereal swirl up from my stomach to my throat.

We arrived, finding him naked, face down into the carpet, mumbling about teenagers and falling.

I called the medics.

They came, and I did my best to answer questions.

Then, silence. I looked  at him, only  to receive  a glare and a head shake that said “How can you let him live alone? What kind of daughter are you?”

They took him away. That was the last time he saw his home, his bird and his dog.

At the hospital he was confused, but the doctors  and had no definitive diagnosis, CAT and PET scans clear, no stroke, no heart attack. They summed up to  congestive heart failure and kidneys were off. He had an esophageal diverticulum that prevented them from offering him any food by mouth, due to the possibility of silent aspiration. He was unable to swallow properly, or feed himself, so a feeding tube was placed in his abdomen.

He was in the hospital nine days. He could no longer walk or eat.

He was placed into rehab, to regain his mobility and strength. I wrote about our daily visits here: (rehab visits)

When they allowed food once more, I was able to see him eat grilled cheese, spaghetti,  eclairs, and soup. I brought him grits, mashed potatoes, egg salad and breakfast from our restaurant. But, he still  wasn’t eating enough to sustain him, so the tube remained. He was gaining his strength, but not to the point where he felt he should be. He was discouraged and disappointed that  he wasn’t getting better. He’d complain that people would say “You’re doing better!” But, he could not see the progress he wanted to.

He began to get depressed.

His slight dementia began to increase, and he would pick fights with my mom, accusing her of pole dancing and doing drugs. He was terrified of being alone at night and would beg me to spend the night at the nursing home.

He developed pneumonia from the silent aspiration and was back in the hospital 8 days. He got better, but once again no more food was allowed. Nothing by mouth, they’d say.

As they began to offer him food once more, he was not as happy as he was previously. He didn’t want the ice cream, grits, potatoes or soups both me and my mom would bring.  He was constantly scared he’s “over do it”. To him, two bites was too many.

He had developed a UTI, and we were waiting for the antibiotics to start. He had one previously and it made him confused, and agitated. We were hoping that may be the reason for his recent mood swing….

My daughter urged us to go visit him one Monday. I was trying to see him every other day instead of every day like I had been, but my daughter said, “No. Let’s go see him today.”

We went outside, and I said to him, “What can I do to help encourage you? You seem so sad.”

He asked for a Coke.

He got a Coke and drank it, he said it was real good and he was looking forward to the masters coming on in a couple weeks.

Two hours later, I got a phone call that his lab work came back off and they were putting him in the hospital for “observation”. We went to see him, and I asked how he was feeling, he said “I feel fine, I’m just tired. Where’s that Coke you gave me? Can you go get it?”

The nurse said he had fluid in his bladder and had to give him a catheter. We left and said we’d see him the following day.

That afternoon, my mom called from the hospital. He was screaming in pain from the catheter, and hesitantly, hospital staff removed it. That night, he had somehow fallen from his bed, and was rushed to ICU with low blood pressure. We went to see him in the morning, and his hands were wrapped in what looked like white boxing gloves, he was moaning and incoherent. He had unknown fluid accumulating in his abdomen, and they needed to do surgery to see what was going on.

He made it through the surgery but his system was failing. The meds to keep his blood pressure up were putting a strain on his heart, and the excess fluid building up was not leaving his body fast enough. He stopped producing urine and he was not a candidate for dialysis I was told.

I was called in the middle of the night, a doctor asked me if his heart were to stop, would I want chest compression. Chest compression that would break his ribs…

I consulted my mom. She said yes.

My heart sank, thinking of not only my dad, but the medic, crushing an old man’s chest…

Fortunately, it never came to that.

The hospital called me in, one early Sunday morning. Three doctors approached me. One lined it up:

“Normally I am very graceful in these situations. Today, however, I’m going to be honest and blunt. He’s not getting better. He’s terminal. Why are you putting him through this?”

Again, my mind flashed to the medic.  Shame on you, you bad daughter.

I stammered, tears welling up in my eyes, I lost it. I knew he had a living will, I knew the feeding tube went against it, I knew my mom was holding onto every ounce of hope and my sister as well. I also knew that I could no longer keep hope alive.

Hospice was called, and papers needed to be signed by my mother.

So he stayed in a comatose state, kidneys failing…

A day later, the overnight hospice nurse called me, she said based on his stats he probally would pass quickly. She called and said the breathing tuble was removed. He was breathing on his own, sleeping… snoring.

She’s off her shift, to call again in a couple hours.

I managed and hour and a half sleep, the next day he was transitioned into a hospice room, still snoring…. I had my daughter with me, I was hesitant to go see him. I was torn, my mom didn’t want to and my sisters were both out of town.

I asked my daughter how she felt about it. She said she wanted to say goodbye. So we rushed to the hospital, ran up six flights of stairs and found him. Peaceful, snoring, on his side. Like a baby in an old man’s body.

I got my mom on speakerphone.

She assured him everything was okay, his eyes opened and his snoring stopped. She hung up. I told him, “People are  waiting, Jesus is waiting. It’s  time to go home, and everything will be okay.” He closed his eyes and began to snore again.  My daughter began to get distraught….

The Masters was about to start in an hour and forty minutes, I made sure it was on his TV.

I said, “I love you” gave him a hug and we walked away.

A hour and forty two minutes later, I call a phone call.

My dad had passed.

My dad’s life  taught me to give of yourself, because in the end; it’s not what you did for yourself that matters.

It’s what you did for others.

Never take a day for granted.

Make each one count. Even the bad ones.

They are the only days we get. 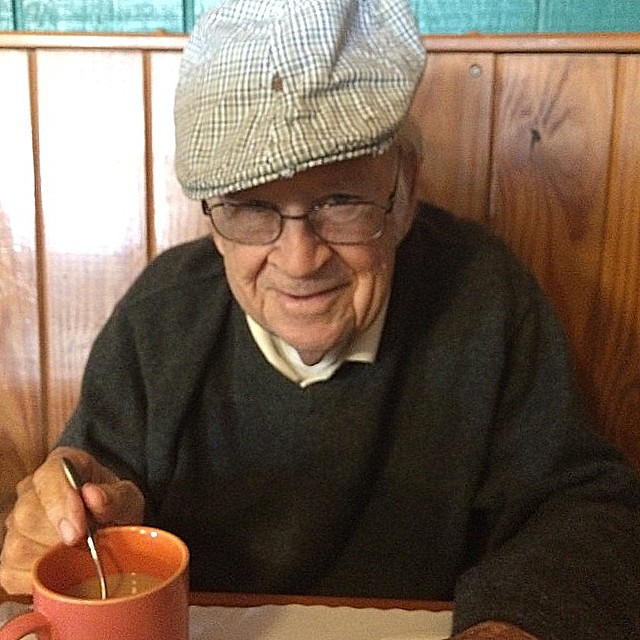